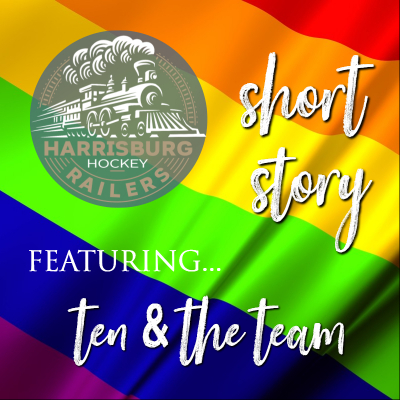 Featuring Ten and the Team

“It’s an honor and a privilege to be able to not only attend this years event in Harrisburg, but to be asked to speak to everyone gathered here at the capital to celebrate LGBTQ pride!”

Even with a mic I had to shout to be heard. The crowds here in Harrisburg were incredible! Warm and open, loving and accepting, everything this world should be but still wasn’t sadly. I glanced over at the chubby woman at the corner of the stage, a stage that was covered with rainbow banners and crepe paper that moved in the warm June wind. She was one of several ASL translators signing all the songs and speeches. She looked at me staring at her and smiled, nudging me with that smile to keep talking as her hands were still.

“Sorry, I’m not used to making public speeches. I’m more comfortable on the ice than on a stage.” A large roar went up from the Harrisburg Railers fans that were mingling with the players in front of the stage. Stan and Erik had Noah with them, Noah’s fat cheeks smeared with rainbow paint that had, at one time, been in the shape of a rainbow. Adler was talking with some reporter as Layton stood off in the wings, waving at me to talk so he could tweet or throw stuff onto Instagram as soon as the words left my mouth.

Dieter and Trent were in Philly for that city’s march, and we missed them, but Trent’s kids were doing a special show tonight and that, of course, took precedence. We’d all be flying to Philly in a couple of hours for the ice skating extravaganza. I assumed there would be lots of sequins involved. Ryker was off somewhere, probably at the food booths. The kid was a beast when it came to eating. And my mother said I packed it in. She should sit down with Ryker.

Ben and Max were staffing one of a hundred booths set up along the parade path, handing out rainbow dog bandanas and walking pooches who needed homes among the masses. Rumor was fourteen homeless dogs and four kittens had found new forever homes since the parade had ended here at the rotunda.

“While we’re all here to celebrate the progress our community has made, we also have to make sure we never forget the losses and struggles in our past.” I slipped one index card behind another, eternally thankful for Jared’s help in writing this brief speech. He was waiting for me beside Layton, smiling calmly, his blue eyes shining with pleasure and love. Fuck but I adored that man so. A gust tugged at the multicolored flag I’d tied around my shoulders. Gay Skating Superman Adler had called me. I was totes down with that. “We, all of us, everyone here, must remember that we march in memory of the Stonewall riots. We march to remember every LGBTQIA life lost to hatred and bigotry. We march to show our strength and solidarity as a community. We march to stand before the world to say, ‘No longer will we hide! We will live freely and proudly, marry who we love, have children with who we love, and we will continue to fight back the hate and bigotry that constantly nips at our heels!’”

The crowd roared in approval. I seriously wanted to cry. My sight may have gotten a little blurry, but I could still see Celeste Divine, the drag queen master of ceremonies, waving a purple boa at me so that I would speed things up.

Right. Finish the speech and rock out for an hour before heading to Philly.

“So, in closing, I’m thrilled to stand here on this stage, an out and proud professional hockey player, with my boyfriend hiding in the wings…” I waved at Jared who lifted a hand to the shouts and cheers, “…and say to all the young fans out there that you can be who you were born to be. Its not going to be easy, but those of us ahead of you are working hard to make it a little less terrible. Be strong, be loving, and be proud!”

I threw a fist into the air and the mob leaped and clapped and threw rainbow confetti all over each other. Chucking my index cards into the air, I jogged off the stage after getting a loud kiss on the cheek from Celeste Divine, and launched myself at Jared, who hugged me tightly.

“Have I ever told you how incredible you are?” he whispered into my ear.

He pulled back a bit, gazed at me, and then kissed me hard on the mouth.

“You are an incredible man, Tennant Rowe.” I stole another kiss, held him close, and nestled close.

“You’re pretty incredible too,” I sighed as Celeste Divine broke into a throaty rendition of “It’s Raining Men” that had the crowd, and all the Railers in attendance, dancing in the streets.

RJ and V.L. wish you all a happy Pride month!!