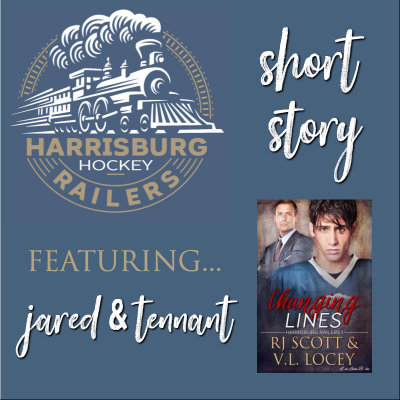 “Are you sure he’s going to like our gift?”

The banging on the door grew louder. I nudged my boyfriend in the ribs. Man, he was such a worrier. “He’s going to love it, now chill.”

Jared gave me his best concerned looks, which I kissed away before leaping up to answer the door.

“Dude!” I shouted and threw my arms around Ryker filling the doorway.

“Dude!” he parroted, dropped his bag on the floor, gave me a hard hug, then released me to go get an embrace from his father. I closed the door, pushed his duffel to the side with my foot, and watched my man hugging the stuffing out of his son. I never got tired of seeing that bond. I knew how important it was to have loving parents and family. No way I’d have ever gotten to where I am now if not for my folks. I give them total props for all my success.

“So, yeah, I know tomorrow is your birthday,” I said because sitting on something as fucking fabulous as our gift was killing me. “But we have to give you a couple things today because…well, just because. You up for that?”

“Totally.” Ryker flopped down on the sofa and held out his hands. “Bring on the gifts.”

Jared rolled his eyes but went off to find the presents. I sort of bounced around as we waited, trying to keep my mouth zipped but man it was hard.

“Open that first and fast,” I blurted out when Jared was back and handing his son a big box. In his other hand was a small envelope with the real killer gift inside.

“Ten, have you been into the energy drinks again?” Ryker asked with a laugh while shredding the neat wrap job his father had agonized over.

I shook my head and forced my ass to sit down on the bench for my piano. I loved this old upright nearly as much as I loved the man who encouraged me to move it in here when the rest of my shit came over with me.

“Woah, these are lush! Thanks, Dad!” Ryker held up the new Bauer Vapor skates to admire them.

“They’ll be amazing skates,” Jared said, leaning back into the couch, all chill. “They’ve got good structural stiffness that’s touted to support power strides better. Also, they say that they give more relief around the ankle collar, so you’ll be able to dig deeper into the turns. The blades—”

“Jared, babe! He knows what skates do. We all know what skates do. Can you give him our gift before I freaking combust over here?!” Both Madsen’s blinked at me. “I may have had one energy drink,” I confessed and blushed a bit.

“Here, you better open this before he detonates,” Jared said, his blue eyes smiling as he handed our joint gift to Ryker. I was bouncing on the piano stool as Ryker slid his finger under the flap of the envelope then dumped the contents onto his lap.

I leaped from the bench, threw myself over the back of the couch, and landed between father and son. Jared grunted at my ass catching his thigh.

“Check. It.” I grabbed the tickets off Ryker’s lap and held them in front of his nose. Ryker’s eyes widened, and then he sucked in some major air as he fought for words.

“Right?! Fucking Marianas Trench tickets!” I shouted and was tackled by one exuberant fellow Trench fan. We laughed and yelled and slapped each other for at least ten minutes. “I’m so totally extra right now!”

“Oh man, I can’t breathe.” Ryker held the tickets to his chest. “This is the best birthday ever. I mean, like ever in the history of birthdays. This is so fleek!”

“Totes. The show is tomorrow night up in British Columbia because they’re not coming into the states this summer. I mean, guys, really? Sure, I know you’re a Canadian band but whatever.”

“You, Tennant, and I will fly up in the morning, see the show, and then grab a hotel and fly back the next day.” Jared dropped an arm around my shoulder and I leaned into him, grinning like a loon. “It’s been a few years since I’ve been to a concert.”

“Yeah, I hear that last Chuck Berry tour kicked some major ass,” I tossed out, getting a firm twist of a nipple that made me yelp. Thank God Ryker was too wound up in texting all the friends on his phone about his windfall to witness the nipple play.

“Thanks guys. I love you both,” Ryker whispered, his eyes alight, and then went back to talking with his buds.

“I love you.” I tipped my head back for a kiss. Jared dropped a soft one on my lips.

“I love you too. Remind me of that tomorrow night when I’m surrounded by people with green and purple hair.” I snickered. “So, son, is this totally woke?” Jared asked. Ryker shook his head and sighed. “What? Tell me I misused that?”

“Sort of,” I replied while Ryker returned to his texting.

“I thought it meant cool.” Jared was just not able to keep up with the hip talk as he liked to call it. Just made me love him a bit more to be honest.

“Nope, it means being aware of racism and social injustice. Like, uhm, ‘While you’re obsessing with the shoes some chick wore to an award show there are transgender women being beaten to death every day. Stay woke!’”