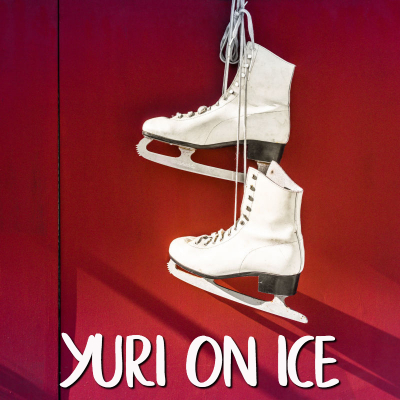 RJ – So there is this thing that loads of people have watched, it’s called Yuri on Ice, and Vicki says I need to watch it. This will mostly be the first time I have watched anything like it, so we thought it would be fun to have a question and answer as we watch it, with me asking all the stupid questions you always wanted to know the answer to… So to kick off… what is Yuri on Ice.

According to the urban dictionary – That one sport anime that doesn’t fuck around with it’s amount of gayness.It’s about cute ice skaters.

According to Wiki – Yuri on ice is a sports anime television series about figure skating. The anime was produced by MAPPA, directed by Sayo Yamamoto and written by Mitsurō Kubo. … The figure skating was choreographed by Kenji Miyamoto, who also performed routines himself which were recorded and used as skating sound effects. Yuri on Ice is about competitive figure skating, and so it has a heavy focus on strength, competition, and the pleasure of winning. As each skater performs their routine, viewers are treated to their innermost thoughts — their hopes, their dreams, their insecurities and reflection on their own movements.

RJ – It’s like a cartoon then? I used to love Scooby Doo, I still do.

VL- It’s animated yes but nothing like Scooby-Doo. It’s anime which is Japanese and their animation is different than what we have here in the States or probably what you’ve seen in the UK. It took me a bit of adjusting when I started watching Yuri!! On Ice and RWBY with my daughter.

VL: Is your version dubbed in English?

RJ: No, it’s subbed. Although I see a problem already… the three main characters, right, TWO of them are called Yuri… how the hell will i keep on top of that?

VL – Oh you’ll be able to tell Yuri and Yurio apart, trust me!

RJ: Okay, so… Yuri Katsuki = the main dude (23 or so), Victor Nikiforov = the other main dude (like older), and Yuri Plisetsky, AKA Yurio is the third guy who is Yuri’s main rival and is only 15.

VL- Pretty much you have it there. Give me a sec. My Crunchyroll app is feeding me commercials and I CANNOT have ads breaking into Victor and Yuri!! *kicks ads in the shin*

RJ: Uh oh… I may have *acquired* it from somewhere… just saying… so, okay, let me know when you’re ready to go…

VL- It’ll be a minute. Okay, I may have it. We’ll see… How do you like the opening song? *sings theme song so loudly the dog goes off to hide*

VL- The animation is amazing as is the story.

RJ: OKay, we’re in Sochi and Viktor is very pretty

RJ: Not the dog! And Yuri is so sweet – WAIT, what is with the wide open mouths…

VL- Oh yeah, Yurio is a bad ass. And filled with attitude. I love the guy though even if he is a thorn in Yuri’s side.

RJ: Ohhh Victor is on the same team as bad-yurio

RJ: The whizzing around is the same as the open mouth thing… just anime… *gets it*

VL- I like how they explain the ins and outs of figure skating to the viewers. It helps for those who aren’t deeply into the sport to understand it.

RJ: I want pork cutlet bowls. And a hot spring to soak in.

VL-Right?! The animation is  so beautiful when they show the hot springs.

RJ: Does Yuri have panic attacks? And what is that pie thing?

VL- Yuri is pretty anxious yeah. The pie thing is where the show is supposed to break for commercials according to my daughter the anime wizard. =D

RJ: Back! So Yuri is copying a routine of Victors, in the local practise rink? Oooo this is beautiful animation…

VL- Isn’t it? The animators did an amazing job capturing the grace and beauty of figure skaters. And the music is perfectly chosen. *sighs dreamily*

RJ: Question (a random one) how the hell do skaters not get dizzy LOL

VL- I have no idea. I’ve always wondered that myself. And Victor lands all his quads!!!

RJ: That was so beautiful

VL- I know. I get lost in the skating routines. Uh-oh, looks like the video went viral!

RJ: That Yurio needs a smack and Victor has pretty eyes, and I just knew it would be recorded…

VL- Victor has pretty everything. What is is about men named Victor??

RJ: Is that Victor’s dog! OMG! Is Victor here!?

RJ: Victor’s naked in the water – in the hot spring – :O DAMN THAT FOUNTAIN

VL- Ahhh, I love this show. So, what did you think?

RJ: I loved it! I think I need to go watch the rest now…

VL- Isn’t it grand? And it only gets better and better from episode one. The romance is just superbly handled and everything is just precious and warm and…and… *sighs again*

Johnny Weir was the inspiration for Trent in Deep Edge!