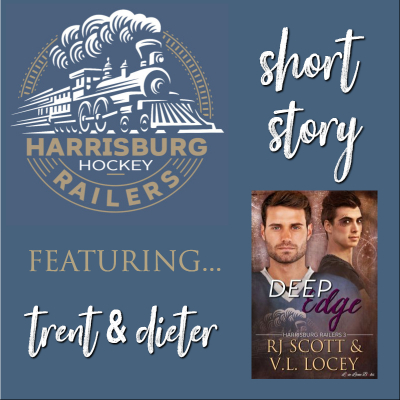 Featuring Dieter, Trent, and the musical members of Rainbow Skate

“Children!! Please, pay attention here!” I shouted and clapped yet no one seemed to be paying me any mind. Preshow nerves had swept over my skaters and they were talking at breakneck speed. I tugged on the gold lamé trousers sticking to my pert ass. My God this stuff was unpleasant, but when you’re running low on funds and someone has bolts of gold lamé in their basement, you kiss cheeks, sew like a demon, and sashay around in lamé like the precious little candelabra that you are. Ugh, the things I do for my kids and this sport. If my students had not insisted I be in this show I’d have happily stayed off the ice – and out of the lame –  but I simply could not turn down my kids.

I spun at the sexy and familiar deep voice, thrilled to see my Dieter smiling down at me.

“Any chance you can get their attention?”

He nodded and then slid two fingers into his mouth and whistled so loudly my ear drums vibrated for a solid minute afterward. All fell into silence.

“There you go babe.”

I wanted to kiss him so badly, but it would smudge my makeup. Later. I’d kiss him from stem to stern when we slipped back to my place after the show. Right now, just having him in Philly would have to do.

“Thank you, sweetie.” I puckered up and pretend kissed him, then I turned to my kids. “Now that I have your attention…Gaston, no, do not pick a fight with LaFou, he’s your friend. So, let’s run over things before the music starts. Belle, where is Belle?”

“Here! I’m here!” Scottie hustled over, her mother at her heels, trying to pin the hem of her little dress before the lights lowered and we all hit the ice for the first ever Rainbow Skate Music and Ice Extravaganza! There had been times  that I had missed the limelight and the applause but not of late. Maybe someday I would tour with Adam again but for now, my kids and my sexy Railer were all I needed. The fact that I was gold from plucked eyebrows to manicured toes was neither here nor there.

“Oh, Belle, you look amazing!” I nearly cried. My precious little Scottie. She was so strong and so proud of winning the role of Belle. The crowd would love her. And woe to anyone who made mention that she was really a he and should not be skating in a dress. Truly, I will bitch slap the first adult who utters such garbage. “Okay, we have two minutes left. Does anyone have to go to the bathroom? There won’t be much time after act one starts so if you have to tinkle now is the time.”

No one moved. I knew that was a problem but so be it. They’d have to tiddle on the QT.

“All of you are going to be just incredible.” I bussed each cheek then turned to gaze up at my man. “Thank you for coming for this.”

“As if I’d miss you dressed up as a candle.” Dieter swept me into his chest, pressing me tightly against him. I may have melted a little but was careful to not let my golden cheek touch his pretty green sweater.

“I’m a candelabra love button,” I reminded him. “A French candelabra who is missing his clock friend. Oh hell!” I wiggled free of Dieter and went off to find Cogsworth, who, it seemed, had decided to go make water after all. Hand firmly in mine, I thudded to the ice, gathered blade guards, patted sweaty brows, and whispered encouragement to each of my students.

“Anything you need before I join the guys?”

I looked back over my shoulder at Dieter. How sweet that he and the team had bought tickets as well as donated a large chunk to production costs. I don’t think I could love him, or those big apes, more.

“Tell me to break a leg.” He patted my ass instead, whispered something sinful in my ear, and then slipped off to sit with the other Railers, my mother, and my Lola.

I whirled around in a circle, patting each small head before sending all my little provincial peasants and my Belle out onto the ice, dabbing at my eyes with the golden sleeve of my incredibly hot shirt.

“Chins up! Shoulders back! Give them a show they’ll never forget! Where is Beast?”

“In the little beast’s room,” Scottie’s mother giggled then pointed, our petite star tripping over her long busy tail as she exited the lavatory. I just knew mentioning it would make them all have to go!

“Come along, peanut, let’s get you tidied up and suitably ferocious.”

I got a big hug from a little monster. Who needs spotlights and medals? I had all the blessings of life any candelabra could ask for.