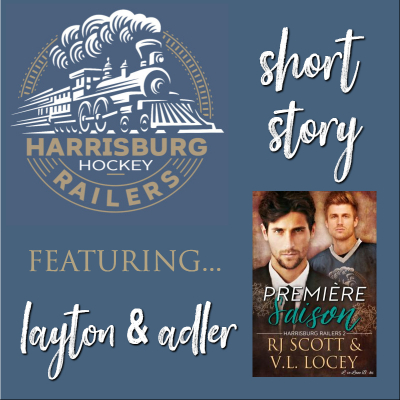 “I can’t believe you made me stop for coffee,” Adler said, for the third time since we’d left our apartment.

I refused to feel guilty, because without caffeine I might do something terrible, like faint or something. Who knew. I wasn’t going to be the one who tested the theory.

“Stan’ll be fine if we’re a little late.”

“Layton, babe, he’ll kill me, he made us all promise we wouldn’t stop for coffee.”

“How will he know we stopped?” I asked.

Adler pulled up at Stan’s gate and keyed in the code, parking up just inside, right next to a low-slung Porsche. We were clearly the last to arrive given the number of cars in here, and I must admit I did feel a twinge of guilt.

“He has these Russian ways of knowing everything,” Adler murmured. “Last week he knew it was me that taped his skates.” In remembrance, Adler rubbed his chest. “I only just escaped with my life.”

I don’t get it really, Stan is a big teddy bear, always happy.

“We’re here now,” I said, and made to get out of the car. Adler stopped me, grabbing the empty coffee cup and opening the glove box, before shoving it in. All I could think was thank fuck it was empty now. It didn’t quite fit so Adler yanked out the mess that was in there, a cascade of CDs and paperwork slid to the floor, along with five Tennant Rowe bobbleheads. They’d been a giveaway at our last game.

“Do I want to know why you have all those Ten bobbleheads in your car?”

My man blinked at me, all innocence, before shoving each one into his jacket pockets and patting them.

He was lying. I could tell. Part of me was happy not to know a thing that was in Adler’s head, he was scary clever and devious, and I hated to think where the bobbleheads were going to end up.

We walked into chaos, Noah crawling over Stan who was lying on the floor, kids running around the place, players drinking coffee, eating bagels, chatting in small groups, wives and girlfriends laughing, and in the middle of it Stan’s mom holding court with a plate of her own bagels, along with our resident figure skater visiting from Philly, Trent and Trent’s Lola, dressed in Flyers’ orange.

I turned around to ask Adler if he wanted coffee but he’d vanished, but I didn’t have time to think about where the hell he’d gone when Connor’s older kids threw themselves at me and demanded I make the balloon animals I’d made at the last Railers’ event.

“I don’t have balloons,” I said, regretfully.

“Ball-yoons,” Stan informed me, handing over a pack of one hundred as Noah hung from his neck giggling like a loon. “Make big scary-toothed dog to Noah.”

I spent the rest of the party making balloon animals and soaking in the laughter of the team around me, and then I heard the shriek. We all turned to look at Lola, standing like a demented orange popsicle in the middle of the room, her purse in her hand, and five bobbleheads hanging from it, tied on the outside of her purse in a knot that looked like it would never be undone. Along with the bobbleheads there was a sign stapled to the string, ‘Number One Railers’ Fan, The Flyers Suck’.

I couldn’t help the snort of laughter that broke the silence of everyone looking at her, and she snapped her gaze to me instantly. I held up the balloon dog I was making in a gesture of innocence.

One by one she stared around the room and God, how could someone so tiny be so intimidating? Then like she was drawn to him she zeroed in on Adler who was trying his hardest not to laugh.

Last I saw of my boyfriend was him fleeing the scene with a tiny orange woman screaming his name and following him.

All I could think was that I really hoped he made it out alive.