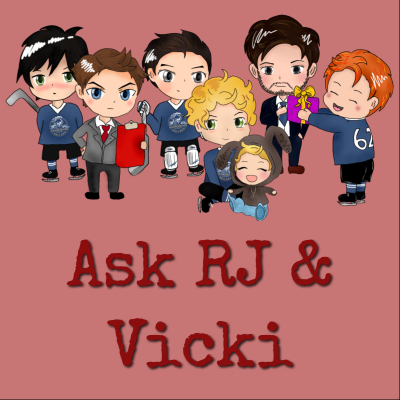 Laurie Peterson – Why the Rangers and why the Pens???

RJ: AHA! A fabulous question. Clearly I’m right with my love of the Pens, and Vicki is wrong

VL: *rolls eyes* This is a fab question though. I don’t know about RJ but I get people asking me “Why do you cheer for a New York team when you live in Pennsylvania?” so now I can explain why that is. I’ll let RJ tell her tale first though because I’m a nice, polite Rangers fan.

RJ: LMAO… well, you see I fell in love with hockey a very long time ago, but being a Brit, it’s difficult to see NHL stuff, so I read ALL the books, and wanted to write my own. So… I decided to follow a team, this was May time two years ago. But who to pick… i didn’t *know* VL at the time, otherwise maybe she would have been able to drag me over to the dark side. Instead I chose my team on one vital important utterly overwhelming thing… how hot the players were (yes I am THAT shallow). A group shared some of their faves, names like Tyler Seguin and so on. Then they shared Kris Letang (fans self) and I was interested in the Penguins.

VL: Tanger is a handsome fellow, no doubt. I like to say he has the face that launched a thousand hockey romance novels. Shame he plays for the wrong team. *ducks cookie thrown at her head by coauthor*

RJ: Ignores you and eats the cookies instead. Anyway, back to my story. So I did some more looking and found this guy Sidney Crosby and a photo of him in a Canada jersey, and OH MY, i was sold. So, I am a Penguins fan… incidentally after I started supporting them they won TWO Stanley cups – a coincidence? I think not… LOL

VL: Oh hush you. Anydoodles, way back in the day like WAY back in the 70’s, I lived about 15 minutes outside of Philly. I grew up there you see, and so, by law, if you lived that close to Philly you were a Flyers fan. Yes, I rooted for the Broad Street Bullies when they were knocking heads and winning Stanley Cups. I still have a crush on Bobby Clarke but I digress…So, when I found myself living near the NY/PA border and having a new baby, I kind of drifted from the sport since Flyers games weren’t televised up here.

RJ: Oh believe me, I’m watching you… and yes, carry on… so you were saying, YEARS AND YEARS passed…

VL: Yes, so many years. Civilizations rose and fell. Ahem. But, after many years I found myself doing this author thing and a small publishing house put up a call for an MM sports romance anthology. Well, I was all over that like ugly on an ape, but I’d not watched hockey for quite some time. I needed to refresh myself with the game and since I was now living beside New York State, all I could get were Rangers games to watch. There was something about that team from Broadway, some sort of spark and drive that instantly captured my heart. Also, they have Hank and Mats which may have swayed me just a bit.

RJ: So you were JUST as shallow as me then LOL

RJ: But, now we know all the stats, and GA’s and all that kind of stuff. Don’t we VL?

VL: Well, maybe some stuff. I’m not a huge stats person, but I do know about adorable scrappy players from Norway with beautiful eyes and incredible flow and other important things like that. *hides face*

RJ: I’m a particular fan of Canadian players… *whistles*, thank you Laurie for the awesome question, I hope we answered it, and you solidly feel that you want to be a Pens fan.

VL: Oh good gravy, stop tempting the people with Pens goodness. Obviously she wants to be a Rangers fan.