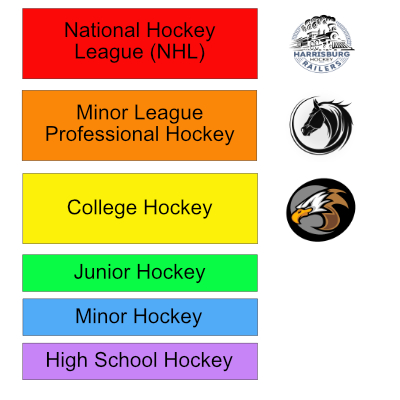 by rachel maybury
93 views
No Comments
0

Before we leap into Pucks & Percentages, we thought we’d take just a moment to explain exactly what the AHL – American Hockey League – is for our readers who aren’t into hockey or are just curious as to where this league fits into things. Hope this clears up any questions you may have. If not, just shout and we’ll do our best to answer any queries.

The AHL – American Hockey League – is in the orange section on the graphic to the left. It a professional ice hockey league in the US and Canada that serves as the primary developmental league for the NHL – National Hockey League. Every AHL team has an affiliation with one parent NHL team. The Carlisle Rush are the feeder team for the Harrisburg Railers. There is a mid-level pro league under the AHL – the ECHL or East Coast Hockey League – that you may hear mentioned from time to time.

The AHL and ECHL are the only minor leagues recognized by the collective bargaining agreement between the National Hockey League and the NHL Players Association. That means that any player signed to an entry-level contract must report to a club either in the AHL or ECHL.

You’ll find four divisions on the AHL – Atlantic, North, Central, and Pacific. There are team awards for the AHL, the Calder Cup being the most coveted. The Calder Cup is presented to the league champions, much like the Stanley Cup.

Average AHL salaries hover around sixty-five thousand dollars a year, which is significantly less than the salary most players in the NHL pull in. Many times, AHL players will be “called up” to fill in on their NHL parent teams due to injuries on the roster. On rare instances, an NHL player may be “sent down” to the minors as well.