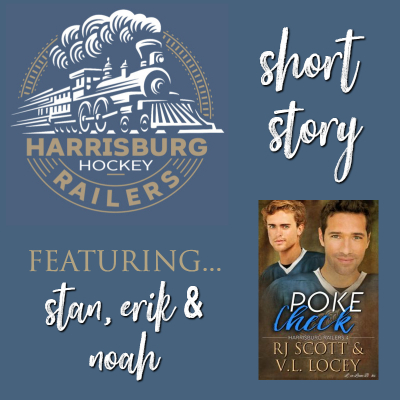 Erik sprinted from the bathroom to the front room faster than Ten on a breakaway. His socked feet skidded to a halt at the start of the hall before he slammed into a wall. The squeals had been loud, fearful, then laughing, then louder and louder, and he’d heard Stan’s low grumble at the same time. What the hell had happened? Was it the cat? Had Noah fallen over? Was there blood?

A blood-curdling scream sent fear stabbing through him, and he rounded the corner to the front room, cataloging everything.

The cat fast asleep on the back of the sofa, not at all fazed by the shouting.

Stan sitting on the floor leaning back against the sofa.

The television was playing a YouTube video of a roller coaster from the perspective of someone sitting in the front seat.

And Noah in a washing basket. Squealing as Stan moved the basket to mimic a car on the roller coaster. Right now, he was leaning it back, slowly bobbing it up and down to mimic the climb of the car up to a peak. Noah bounced, pointing at the screen.

“Go down! Go down!” he shouted and squealed again as Stan bumped the basket, and leaned it slightly more back.

“Is fast little rabbit!” Stan exclaimed and laughed uncontrollably as they reached the peak of the coaster on the television. They were going over the top, Noah enthralled at that moment as they reached the top and began to fall. Stan tilted the basket forward, bouncing it as the coaster on the TV sped down the incline, and Noah screamed and laughed, and his round cheeks were red from exertion. Stan kept it up, leaning into bends, vibrating the basket when they passed the connections in the track, and finally, slowing to a stop. The graphic had people waiting for the next cars.

“Waves all to people!” Stan waved where Noah could see, Noah waved as well. When the ride finished, he turned in the basket and threw himself into Stan’s arms.

Stan rolled him onto the floor, tickled him, laughing along with him, and Erik watched them both, his heart overflowing with love. Somehow Stan must have noticed him there, he gestured him over, and Erik sat cross-legged next to them.

“Much fun for little rabbit!” Stan exclaimed, then helped Noah back in the basket.

They ran through the video again, and Erik couldn’t stop smiling.

“I love you,” he murmured, but Stan wouldn’t be able to hear over the sound of the coaster on YouTube and Noah’s squeals.

That didn’t matter. They didn’t have to say the words to each other to know.

Noah, Stan, and Erik were family.

And love was a given.