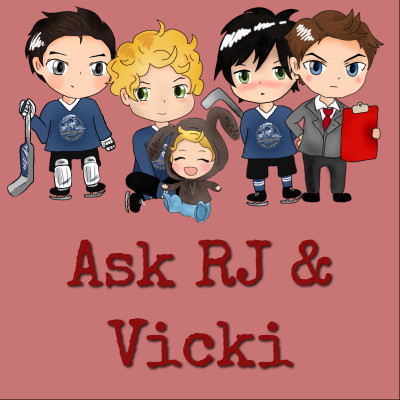 Though the thing I’m most curious about is how you two manage to write and publish so quickly. Your pace is ridiculous, in a good way.

VL: Two questions in one! I love it. I’m going with Zucc because well…he’s Zucc and squishy cute and huggable.

RJ: She went with Zuccarello – that’s a surprise (LOL). I’m going with Bryan Rust from the Pens, because when we talk cute he ticks all the boxes. He loves dogs for a start. Then, there is his stutter, and his yummy face. To be fair I just want to hug him protectively and keep him safe from the bad world.

VL: Onto the second part of your question, Alexandra. How do we manage to write and publish so quickly. RJ is a wizard. Like from Hogwarts. Truth.

RJ: Let’s face it we both have too many stories in our heads

VL: That’s true. We’re really lucky in many regards when it comes to our co-authoring because we have the same writing process.

RJ: You mean we make things up as we go along with very little planning at all

RJ: So when we’re talking co-authored books, it’s a really cool experience me and V have going on. She writes as much as I do – and we both turn around chapters in a day. So, a 14 chapter book could theoretically be written in two weeks. Of course we both have to sleep, but Changing Lines was written in three weeks from start to finish. My editor tells me that I blurt out stories, that they just fall out onto the page, and I think Vicki is similar. We will chat about what we feel should happen in the next chapter, get a feel for where we are in our characters stories, and then seperate. Sometimes we’ll throw the each other a curve ball, but that only makes it all the more fun!

VL: I had something clever to say but I forgot what it was…

RJ: That makes a change (hides from flying objects thrown from the US)

VL: OH! I remember now. I was just going to add that we also have that time difference working for us. And there have been days when I wake up to a chapter waiting for me in my inbox from RJ and then I’ll be Ms. Inspired and write the next chapter the same day.

RJ: I love waking up to a chapter from V, particularly if it contains a Stan scene – she’s a master of those.

VL: *blushes* I thought you were going to say ‘If it contains a sex scene’ but that’s me. #SluttyVicki

RJ: I like to end the chapters I send to Vicki with something like *wanna go to my place and bump uglies?* Then she has to write the sex scene…. BWHWHAHAHAHAH

VL: It’s an ordeal to write all that hot steamy sex. Is anyone buying that?

RJ: Not me. So did we answer the question? Bryan Rust, wordcount, take the piss out of V, yep, i think I’m done. You?

VL: Zucc, wordcount, tell the world RJ is a wizard. Yep, I think we’ve covered it. Thanks for the great questions Alexandra! We’ll be back in a couple weeks with another question from our members. *hugs*