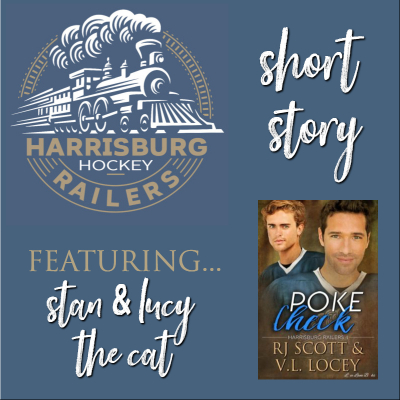 A Railers Short – It’s The Thought That Counts

Featuring Stan and Lucy the cat

“Okay, so, I am unlocking cat door for you. This way I am not coming to back door twenty-seven times in single hour for your knocking with paws.”

Lucy rubbed around my legs, purring, grateful for her backyard time with the dogs. She was such a good cat, loving and sweet. She spent many hours licking the dogs faces, and they were also sweet and let her. Noah also would get his face washed from Lucy when she curled up in bed with him at night, but Mama didn’t like the cat in bed with our baby. Mama said the cat would suck life out of the child and no matter how many times I tell her that is not right, she insists on no cat sleeping with her grandson.

“Now, go play in yard. Do not catch bird! Bird is good. You only catch bad moles that make yard bumpy.” I gave her a small push on the rump to get her outside then let the flap fall down. I had tons and tons of laundry to do today. Mama was off with my sister shopping and Erik had taken Noah to the park to play with other small children. He needed a brother or sister badly I felt.

With the cat now outside, I went to the laundry room, which is close to the back door, and opened the dryer. Mounds of little bunny clothes waited for someone to fold them and that someone was me. I reached up to the shelf over the washer and dryer to turn on a small radio/CD player we used for wash day. Mama played her music on it and sang while folding. I did the same, but my music was the King of Rock and Roll, Elvis, and not old Russian folk songs.

Today I was in the mood for the 50,000 Elvis Fans Can’t be Wrong album, so I slid that CD in and begin folding. Just a minute later, I felt my cat weaving between my legs and I smiled. I so liked the new pet door! I glanced down, a tiny sweater in my hands, and saw my cat looking up at me with a rodent in her mouth that she then dropped on my bare foot. The chipmunk was very much alive and tried to run up my pantleg. I think I may have screamed, but I cannot say for sure this is truth. What is truth is that I pulled off my pants, shook out the chipmunk, and then danced a fine dance as the rodent and the cat both dashed around my feet. The chipmunk darted away, Lucy was still trying to stick her toenails into my underwear which I wasn’t very happy about. Toenails and testicles are not a good match.

“Lucy! No, this is bad! So bad! He is there! Look!” I pointed at the little brown chipmunk and threw a dryer sheet box at the rodent. Lucy pounced on the box instead of the chipmunk. The chipmunk ran behind the washer and dryer. “Agh! No, cat, no! Chipmunk is not inside box.” I sighed loudly. “Chipmunk is bigger smarts than you is sadness for me to say.”

“Meow.” That was what she said then jumped up on the dryer to get her chin scratched.

“Why is bringing a live rodent into house reason for chin scratch?” I bent over to look behind the washer but couldn’t see a thing. “No, I am no petting you for doing bad cat thing. You must go catch chipmunk and kill it then I will makes loves for your chin many hours long.”

Lucy laid down with a huff, her tail slowly flipping back and forth. I quietly opened the door to reach outside for the broom. The dogs ran into the house, barking madly. Lucy leaped up in fright. The chipmunk sped down the hallway with three dogs, a cat, and a Russian with a yellow broom right behind it. The dogs chased it behind an end table, knocking the table over and breaking the lamp. The chipmunk scampered up onto the entertainment center. Lucy followed with a smooth leap from the floor, skidding across the flat top, and knocking the photographs of Noah to the floor. I took a swing at the little bastard when he jumped from the entertainment center to the window. I hit the curtains and somehow the rod fell from the wall in a flouncy poof of white sheers and dark blue curtains.

Then the chipmunk ran back down the hall and out the open door, our dogs, and the cat in hot pursuit. The front door opened, and I looked over my shoulder to see Erik standing in the doorway, Noah on his hip. His pretty blue eyes were wide.

“Do I even want to know?” he asked. I pulled up my underwear and leaned on the broom. He looked at the broken lamp, upside-down photographs, and curtains on the floor before he gave me a quirky look.

“Lucy brings me gift today.  Is chipmunk. Big one. Maybe weighs ten pounds.” I nodded at my accurate weight assessment.

“Maybe even bigger. Is huge. Evil eyes.  It tries to get into my pants.”

“Well, I don’t blame him for that,” Erik chuckled softly. “Where is this mutant chipmunk now?”

“Back outside in yard. For cat, I am thinking it is good gift for human she loves.”

“Ah, well, it’s the thought that counts, right? Maybe next time she can just send you a card or something though?” He sighed at the carnage.

“How can she do this? She has no thumbs to hold pen to sign card.”

Erik studied me for a long, long moment. “Sorry, right. That was silly of me.”

“Is okay. I love you even for silly things.”

“DA! PA! MA! FAFF!” Noah shrieked in glee as the cat, dogs, and chipmunk made another lap around the living room.

Bad times followed. I ended up buying two lamps and locking the cat door for the rest of the day. Lucy was not happy, but she did forgive me that night by gifting me a grasshopper she had caught in the basement. It was a fine gift but perhaps not best suited for bedtime.